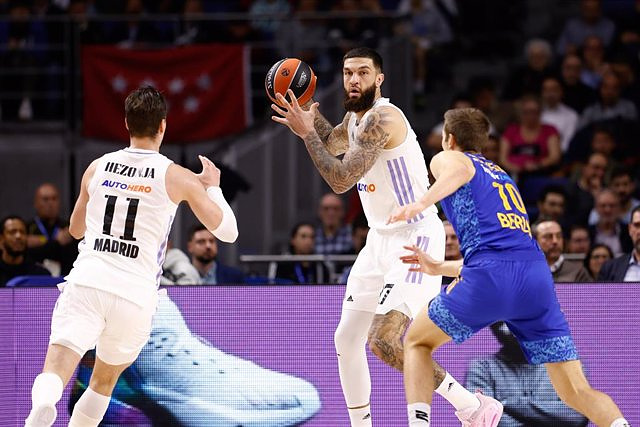 Real Madrid will seek to continue growing at this point in the season and close the double day of the 2022-2023 Euroleague Regular Phase with a new victory this Thursday at the Wizink Center (8:45 p.m.) against Zeljko Obradovic's Serbian Partizán Belgrade.

The Madrid team seems to have allayed the doubts it went through a few weeks ago and its current run in the top continental competition, with four straight wins against Armani Milano, Anadolu Efes, ALBA Berlin and Valencia Basket, confirms its improvement. Mainly defensively.

Chus Mateo's team carried out an always complicated visit to La Fonteta (73-80) on Tuesday, where they made it clear that they have also taken a step forward on an offensive level, with a collective game led by the Bosnian Dzanan Musa, author of 28 points and six rebounds, for a total PIR of 32.

Now, the objective is to continue building a stronghold at the WiZink Center, where this year they have already suffered setbacks against Greek Olympiacos and Italian Virtus, to continue already installed in the area of ​​the top four in the standings against a Partizan that it goes down significantly far from the Stark Arena.

The Serbian team, European champion in 1992 with one of its best generations, had not faced Real Madrid since 2014 and now returns to the WiZink Center at the hands of 'maestro' Zeljko Obradovic, who among his achievements in the Copa de Europe is to give the title to these two teams.

Partizán arrives in the capital with a 4-5 record after losing clearly on Tuesday at the Palau Blaugrana by 79-68 in a match where they showed that it costs more offensively than defensively where they have good physique with players like Zach Leday, James Nunnally, Dante Exum or Matthias Lessort who together with Kevin Punter, their best scorer (15.6 points on average) despite falling to two points against the blaugrana, form their most important pieces.

"It's a team with great athletic ability and that plays with a good pace. It has many players in the low post and they are capable of scoring one-on-one. It's going to be a long game and we're going to fight for victory until the end , we cannot relax because it will be an even match", warned Chus Mateo.