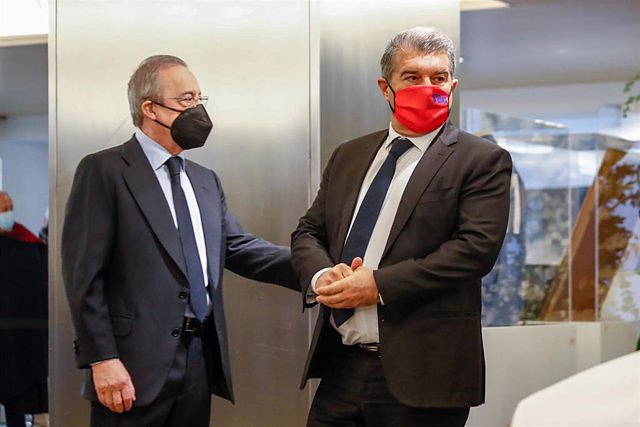 Real Madrid and FC Barcelona refuse to attend the Extraordinary General Assembly of LaLiga that the competition has urgently scheduled for December 7 in Dubai (United Arab Emirates) for considering the call illegal and for various disagreements with the entity chaired by Javier Tebas.

The Assembly was notified to the clubs last Friday, November 25 to be held "urgently" on December 7 in Dubai, to address multiple important changes to the statutes and internal regulations of LaLiga.

As Real Madrid revealed, LaLiga will facilitate attendance at the session by making the "opportune transfers and accommodation" available to the representatives of the clubs and their companions.

The white club, in a statement, considers the call "illegal", since the clubs are summoned "more than 5,000 km from the LaLiga headquarters". "It is totally unjustifiable to address in this improvised and urgent way, without the appropriate debate and calm analysis, relevant modifications to the internal regulations of LaLiga," wields the white entity, chaired by Florentino Pérez.

"It is completely inappropriate and deeply inconsistent that LaLiga commits the economic waste of displacing more than 100 people to carry out an act of this nature, on these dates, to the United Arab Emirates, when it could be held at the LaLiga headquarters without incur extraordinary costs," the statement continued.

For this reason, Real Madrid CF will not send any representative to Dubai and regrets having to react to "irresponsible actions" by the president of LaLiga, Javier Tebas, which in his opinion have an "unjustifiable economic cost" and "seriously damage the image and reputation" of Spanish football.

For its part, FC Barcelona reported in another statement that it will not attend Dubai next week. "In said Extraordinary Assembly, it is proposed to discuss very relevant issues, related to the modification of the Statutes and the General Regulations of LaLiga that require a greater prior debate and a more extensive and participatory analysis, which facilitates the maximum consensus that a reform of this type deserves. size", argued the blaugrana club.

"FC Barcelona's position has always been to reach consensual agreements after having dealt with them previously with coherence and respect for all positions", he recalled, in this sense.

For all these reasons, Barça does not believe it is "opportune" to make this trip to Dubai and agrees with Real Madrid that the event "could well be held at the LaLiga headquarters". "Once again we express our opposition to any action that we consider harmful to the rights and interests of FC Barcelona," said the Catalan club.