Marc Márquez: "Because of how my sports career has gone, competing just to compete doesn't make sense to me" 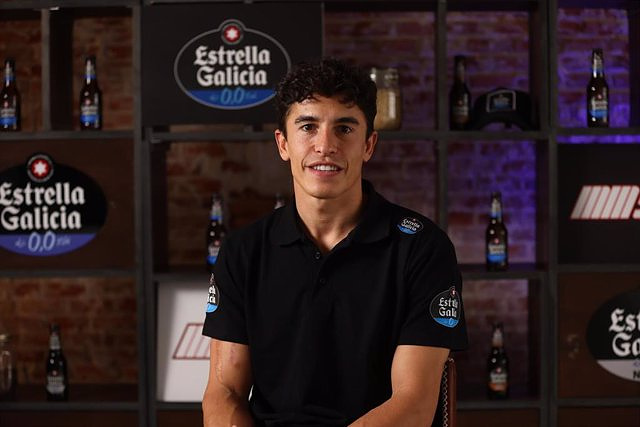 The Spanish rider Marc Márquez (Repsol Honda) is clear that due to his "mentality" and the results and successes in his sports career it no longer makes sense to "compete to compete", while facing this year's World Championship he hopes to know in the first race in Portugal in March "what is one hundred percent" of a right arm that has undergone surgery four times in just two years.

"Because of my mentality, if I continue competing it is because I see possibilities of achieving good results and that the work has compensation. The way my sports career has gone, competing to compete, to fill the starting grid, does not make sense to me. , I'm not like that", admits Márquez in an interview with the magazine 'GQ' of which she is on the cover of its February issue.

The one from Cervera acknowledges that "there came a time when suffering surpassed passion". "I told myself 'either I'll remedy it or it's not worth continuing to compete' because it was taking away a lot of my quality of life, it was not only failure after failure, but also constant pain, and the pain changed my character, I didn't even smile anymore", confess.

The eight-time world champion, who has had an ordeal with his shoulder since his fall in Jerez de la Frontera (Cádiz) in July 2020, has learned that "if you don't take care of your body, you can't practice your sport." "The thing in Jerez happened because of my mentality and my ambition, but everything I achieved from 2013 to 2020 was also achieved because of that mentality and that ambition, so if you take the ten years together, the scales are balanced," he stresses. he.

Márquez managed to come back in 2021 and was able to win three races, but the pain was still there. "I would win and I would cry. What comes out to me when I win is to celebrate, celebrate, laugh with my family, and then it would come out the other way around and it was because of the pain that I constantly suffered in my arm and that I couldn't forget", emphasizes the ilerdense.

The Repsol Honda rider knew he would have "difficulties" and sensed that he would suffer "limitations". "But my goal was to fight for the World Cup again," he stresses without hiding that last season he had "no head or physique in the competition." "There is a moment when I can't take it anymore and I go to my doctors in Madrid and I tell them: 'Here is something wrong with this arm, because I am going backwards'. That is when they really begin to evaluate everything and see that there are 34 degrees of rotation in the humerus," he says.

Thus, the Italian Grand Prix arrived when days before the race they called him from the Mayo Clinic and told him to get off the bike because they had confirmed that those 34 degrees of rotation were "inhuman". "They had always told me that more than 20 degrees was already an exaggeration and there were 34. Thinking about it now, I say: 'Holly, you're going 350 km/h with your head somewhere else, with your head that next week you'll already You are going to operate'", points out the Spaniard, who ran that appointment even after going through the operating room again for the fourth time.

In this sense, he remembers that his grandfather advised him to leave it because he already had "enough to live", but the one from Cervera promised him that it would be "the last operation" on the humerus and that he would let him "try". And once he had operated, he told the doctor: "Look, I'm a wild animal that you have right now inside a cage. When you open it, I'm going to run away, so open it only when you see me ready, when you know I'm not going to there is risk."

"He understood it and told me: 'Well, three months quiet'. I asked him that way because I had already lived the experience of rushing, and if the doctor tells me that after a month or a month and a half I can try the motorcycle, I know that I'm going to try it", adds Márquez.

Now, with a view to 2023, his goal is the Portuguese Grand Prix that will open the World Cup in March. "Then I will know what is 100 percent of this arm, which obviously will not be 100 percent of a completely healthy arm, but we have to get to the point that it is a functional arm and perfect for riding a motorcycle. I think we are going to arrive, because I notice that it is going much better", he celebrates.

Finally, the Catalan speaks 'All in', the documentary about him that will be released by 'Prime Video' in February and where he believes that by opening up "so much" he has been able to take "a certain risk as an active pilot because you expose all your fears and your doubts the rivals". "You can see how an athlete who had had an idyllic career up to that point is in a difficult moment and with retirement going through his head for a whole year," he explains.

And one of the things that can be seen in the piece will be what happened at the Valencian Community Grand Prix where Jorge Lorenzo (Yamaha) was proclaimed champion and after everything that happened with Valentino Rossi (Yamaha) weeks before in Sepang (Malaysia ).

The eight-time world champion clarifies that he does not admit in the documentary "openly" that he did not want to overtake the Balearic Islands to favor the Italian, with whom he was already having a bitter controversy. "It's not that I didn't want to overtake him, but overtaking him meant taking a very big risk," he points out.

"What I openly acknowledge and explain is what I experienced in those weeks. People often ask me what would change in 2015 and I think what would change is the way Valentino managed the end of the year. When you're not the fastest On the track you look to stir things up to see what you can 'fish'", he says.