Luis Enrique: "I feel your energy, we are beings of light"

The coach agrees with the King with the "superb" debut against Costa Rica. 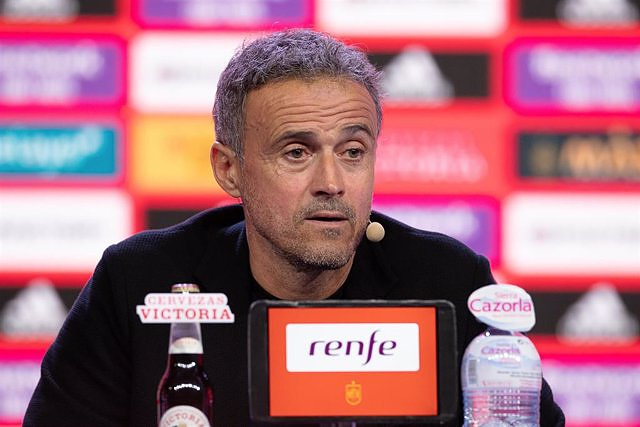 The coach warns the VAR in Qatar: "You have to watch the contact in the area"

The national soccer coach, Luis Enrique Martínez, resumed his love for streaming this Thursday, once again dealing with various personal and professional issues, with the good taste of the win (7-0) over Costa Rica and with a view to the next duel in the World Cup in Qatar 2022 against Germany.

"Everything went smoothly. The result was unbeatable. It's a short competition and a bad match throws you out. Germany arrives with a need that will force them to take risks," he said at the start of a new chapter of his facet of ' streamer' on Twitch.

'Lucho' celebrated that his team handled the start of the tournament calmly and was asked about King Felipe VI's positive interpretation when he went down to the locker room. The monarch confessed that he had not seen any error. "Analyzing a game in Spain takes me four hours. Now we have just finished," he commented.

"There is some minimal error. We were superb in the circulation of the ball and in the pressure after loss. I spend more time improving our game model. We play the same regardless of the rival. We seek to repeat a series of circumstances so that the player can acknowledge," he added.

On the other hand, the Asturian coach explained that as a coach he tries to "help the player", understand him, and insisted that he focuses 60% of his work on his team. "Against Germany it's the same strategy. Until the day of the match we don't teach them anything. We advance things, they know Germany too. The same day of the match we show them where we can have an advantage," he said.

In addition, Luis Enrique was asked about the use of VAR and the penalties that are being called in the World Cup. "They are beginning to punish actions in the area that are almost struggles. You have to watch the contact, if there are grabs, in slow motion it can seem like a penalty. We are attentive to these plays," he said.

The 'La Roja' coach, who celebrated Andrés Iniesta's visit, revealed a "spectacular training session" this Thursday, which makes him "be optimistic and very calm", and explained that this dedication to 'streaming' does not seek to free the players nor monopolize the critics. "I prefer to be in the background or third plane, this appeared with my son, it is not to argue," he said.

Going back to sports, 'Lucho', who pointed out that even if he doesn't watch any game live, he logically follows the World Cup, insisted that the eleven against Germany on Sunday will not be the same as against the 'ticos', after also analyzing the match of the Germans against Japan. The coach insisted on the good energy that comes from the fans, in addition to his loved ones.

"I feel your energy, we are beings of light. I connect with my loved ones. It helps me a lot. I feel your energy and if you can touch yourself it's much easier," he said, highlighting the growing following that the team has. "Not for this game, in the European a different trend has already started," she said.

"It's very nice to feel the affection and if we return it, even better. This is a show and we are obsessed with winning. We think there are more options playing well and more fun for the player and the spectator," he added.