Luis Enrique: "Gayà had bad luck, he would have expected another player" 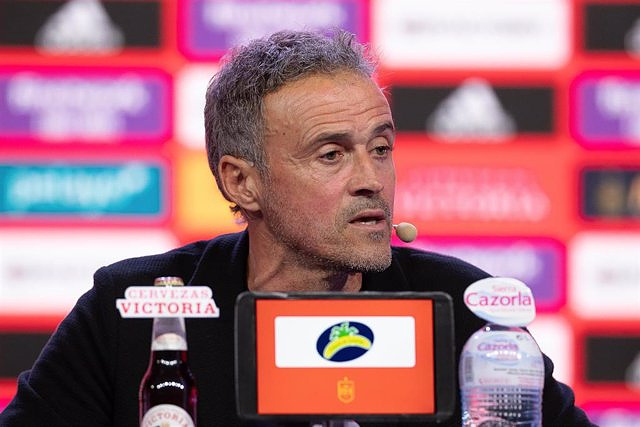 The Spanish coach, Luis Enrique, has recognized that the Valencian player José Gayà had "bad luck" having to leave the concentration due to his sprained ankle due to the fact that there were only two left-backs in the group, and he has confessed that if he Had a footballer from another demarcation been injured, he would have "waited", and he has warned of the danger of Costa Rica, a rival that has always competed "incredibly well" in the World Cup and that will put them "in difficulties" in their debut this Wednesday in the world Cup.

"If I had to make the decision from my heart and because of what I feel for José Gayà, I would still be here, but I have to make decisions with my head. Both the doctors and the external people that I consulted said that it was a 10-year injury -15 days, that is to say, that I would not be 100% in any way for the first two games. I am very sorry, I have to make the best decision for the team," he said at a press conference.

In this sense, he explained that he could not run the risk of running out of left-backs. "Imagine that I do what the Valencians want and what José Gayà deserves, which is to keep him in the squad, but Jordi Alba twists an ankle today and we start the first two games of the World Cup without left-backs. I have to put what that I want or that my heart tells me what my head tells me, that I have to lead this group and do the best for the team. The best thing for the team, without a doubt, is to summon another player and have two left-backs in full conditions to start the World Cup," he said.

In addition, the Asturian coach was sincere in acknowledging that another player, due to his position on the field, would have expected it. "It's the only position in which I can't wait for anyone. It's the only position in which there is no one who can adapt to what a left-back has to do: defend, be able to play winger at times, that it attacks in depth, that it has a powerful offensive and defensive profile... José Gayà has had very bad luck: it is the only position we cannot wait in. If it happens to a right back, a pivot or a center, would be summoned here, and would endure and wait until the last game", he confessed.

"I only have two specific uncles in that position, nobody who can adapt, and I feel sorry for Gayà, who is a phenomenon, I like him wonderfully and I appreciate him very much. I have to put what I have to do before my feelings. He has had a lot of bad luck; he bends his ankle by centering himself, I had never seen it before. The laws of the universe determine what will happen to each one of us. What hurts José Gayà so much now, he will see it as something not in the future so negative and you can get something positive out of it," he continued.

He also revealed that he will be able to count on the colds Álvaro Morata and Dani Carvajal. "Tomorrow they would all be available to play, including Guillamón, who we are taking care of for a small physical issue; we don't want him to touch the ball so that he recovers well. They could all play," he said.

Nor did he rule out using Rodrigo as a central defender at some point in the tournament. "We have quite a few players who can act in various positions with guarantees. Both he and Hugo -Guillamón- do well; Ayme Laporte has played in either of the two positions, center-back on the left and center-back on the right, and full-back As a coach, I really like having these possibilities. I don't rule out using these players in any of the positions throughout the World Cup," he said.

"The doubts I have are because I have seen the players at a high level of competitiveness. The fact that the player knows that training can win the position makes the level of training very high. I do not choose the players for what physical nor by the tactical, but by the 'feeling'", added on the possible starting eleven.

In another order of things, Luis Enrique stressed that "the objective is to be until the end" of the World Cup. "If we can play seven games, why are we going to stay with five?" He said, before qualifying himself as the leader of 'la Roja'. "The leader of any team has to be the coach, because otherwise the players are not going to trust someone who has doubts. Of course I am the leader of the team, I have to decide who plays, who is called up, at what time we travel, how are we going to play... I have to empower the players so that they give their best version in a difficult situation, which is playing on the pitch. I feel mentally perfect, delighted to make my debut as coach in a World Cup. I am very calm, tomorrow we will try to live the debut with a lot of desire to give a joy", manifested.

The Spanish coach also assured that "it benefits" the fact of "having been so little concentrated." "We are going to compete with only ten days of coexistence, and it seems positive to me; when one is concentrated for two or three weeks, he accumulates too much energy, and now we have just enough. Tomorrow we will prepare the game and try to reach the right activation point," he stressed. .

On the other hand, he analyzed the Costa Rican team, a rival commanded by Keylor Navas who "has played in one of the best clubs in the world" and who stands out for "his role and his leadership." "We know the Costa Rican national team and individual teams. Óscar Duarte, Keylor Navas, Joel Campbell, Borges... They are players who have experience at this level. They have an expert coach. They are going to compete well for sure, they are going to put us in in many complications and we are going to have to be very attentive and very accurate," he said.

In another order of things, Luis Enrique once again downplayed his 'lapse' by assuring in a 'streaming' that Costa Rica was in South America, and assured that in no case was it a sign of contempt for the country or the selection. "As staff, we give the information to the players on the last day of the game. We talk during the week about what we think we are going to find, but we give the explicit talk on the day of the game. We train throughout the week on game situations that we believe will occur against Costa Rica. Deep with respect to all the World Cup teams, especially those that are in our group," he said.

"When I located it in South America it was a mistake, a foolish oversight. I have been in the country, I love the energy and the 'pura vida' of the people there. Those who notice that little mistake must never be aware of it. They're wrong, but if I have to apologize, I ask for it. As I know the energy that the 'ticos' have, I know they won't take it into account. It's a very difficult game, it's the third World Cup in Costa Rica and they've competed incredibly well. We have lots of illusions and a lot of desire to win this first game", he concluded.