Lilian Thuram: "Vinicius suffers from racism? People must respect him"

"That Dembélé is more important and decisive at Barça is something natural". 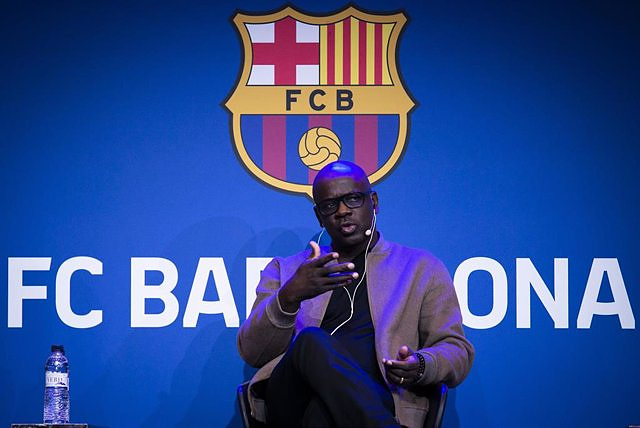 The former player Lilian Thuram, who was a member of FC Barcelona between 2006 and 2008, assured this Wednesday after presenting his book 'El Pensamiento Blanco' in the Catalan capital that if the Real Madrid player Vinicius Jr is insulted with racism, the first thing to do is to do, beyond his attitude on the pitch, is to "respect" the Brazilian as a player and as a person, while he assured that the blaugrana Jules Koundé and Ousmane Dembélé will go further and become better players over time.

"There are many players who do not have a good attitude. But you tell me that Vinicius suffers from racism and if he should change his attitude... Above all, you have to respect Vinicius. Many times people do not understand the violence of racism. When you are young and they insult you, it's very difficult. People have to be told that Vinicius must be respected", he asked in statements to the media.

Thuram is in Barcelona to present, on the one hand, a project between his foundation and the Barça Foundation to help fight against racism and, on the other, to present the book 'El Pensamiento Blanco'. For this reason, he was critical of those who insult Vinicius for being black, something that he experienced in the first person.

"If there are posters of a player of a different color in a child's room, they won't have prejudices when they grow up. Football can help change mentality, but to do so you have to accept that racism exists and that you have to keep working", Thuram appealed during the presentation of his book, with the faith that football can and should help fight racism, and not the other way around.

On the other hand, when asked about his compatriots Jules Koundé and Ousmane Dembélé, important in Xavi Hernández's schemes, he was clear; both will get better. "Ousmane Dembélé's career has gone very fast. He played in Rennes, Dortmund and came to Barça and it is normal that now, at 25, he is more important and decisive. It is something natural", he commented on the winger.

"I really like Koundé. When I started playing in France, they said that I couldn't be a very good player because I wasn't tall or very fast. But he's very intelligent, and you don't know how far those players can go. I think Koundé with the years he will be a better player because he is intelligent", he assessed the center-back, a position he held in his long career.

As for the current Barça, of his former teammate Xavi, he believes that it is going well and he predicted success for him. "Xavi's Barça is doing well for now, they have won the Super Cup and they are first in the League. Very good, we must not forget that he is a young coach. I hope that at the end of the season Barça wins the (League) title" , he stated.

Lastly, he qualified that there is nothing at the moment about a possible signing of his son Marcus Thuram (at Borussia Mönchengladbach in the Bundesliga) for Barça. "All the players have the dream of playing for Barça, that's a reality. But I don't know if there is interest, or a contract. The important thing for Marcus is that he continue to improve to be stronger", he valued.

‹ ›
Keywords:
Real MadridBrasilRacismoFútbol Club Barcelona
Your comment has been forwarded to the administrator for approval.×
Warning! Will constitute a criminal offense, illegal, threatening, offensive, insulting and swearing, derogatory, defamatory, vulgar, pornographic, indecent, personality rights, damaging or similar nature in the nature of all kinds of financial content, legal, criminal and administrative responsibility for the content of the sender member / members are belong.
Related News