Koke: "Spain is the best team, if I didn't believe it, I wouldn't have come to play in the World Cup" 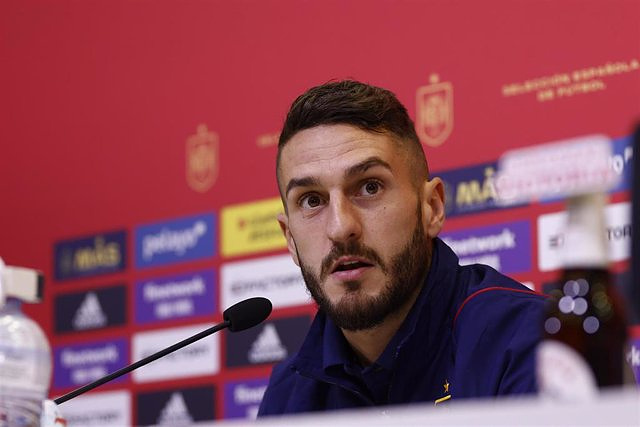 The midfielder Koke Resurrección assured this Tuesday that Spain is "the best" team, affirming that if he did not believe it, he would not have come "to play in the World Cup", at the same time that he stressed that "one of the strengths" of the team trained by Luis Enrique it's that they have "an idea" and they go "to the death with it."

"For me, Spain is the best team. We're going to death with our idea, if I don't think my team is the best, I'm not coming to play a World Cup," the midfielder defended at a press conference from Qatar.

Koke, a substitute although with minutes in the first two matches of the team in the World Cup, emphasized that "everyone" has "the same mentality", both starters and substitutes. "The starters will die on the field and those who come on as well. I see it as a strength that we have very good people, who want to play. We'll see how the games go to see the people who come off the bench," he said.

"I feel comfortable playing for the national team, I enjoy it and I learn a lot. It is one of my virtues to want to continue learning at 30 years old, I consider myself young. I like to pay attention in each training session. In the match against Germany I felt comfortable. I will help the selection in whatever it needs, like all my teammates", commented Koke, who has accumulated 70 international caps since his debut in 2013.

Thus, he pointed out that the role of the "veterans", who have already experienced the elimination in groups in Brazil and the defeat in the round of 16 in Russia in 2018, can "help the youngest". "We veterans are very plugged in, like the younger ones, with this new energy. The whole unit is what makes a group so healthy and strong. It is essential that we all feel important and Luis Enrique is doing it," he celebrated.

And it is that the Vallecano is being important in the adaptation of Gavi, a partner who sits next to him in the locker room alluding to the numbers. "I give them peace of mind. The youngsters are very excited and we try to keep them from getting into the madness and nervousness that surrounds the World Cup. They have to enjoy it and be calm. Those of us who are older try to calm them down so that they play calmly and give their best. We have a spectacular group and we have to take advantage of this", he explained, before highlighting Pedri and Gavi himself.

"They both do magic, they are at a spectacular level being so young. Those of us who are older also learn from them, Pedri does things that others don't do, it's spectacular to play alongside Pedri," he confessed.

Against Japan, when a victory would put Spain first in the group, Koke maintained that his "only strategy is to go out and win." "You do the math on how we can stay, but our idea is to respect our opponent by going to win, it's the only way to prepare well for the game and qualify for the round of 16."

For this reason, they will face the Japanese with "the idea of ​​having possession, of making the field big, with people between the lines." "One of our strengths in having an idea and going to death with it, is what Luis Enrique has transmitted to us," he highlighted, before analyzing the next rival. "Japan works very well, it is very organized, with a lot of people behind, although it comes out with a lot of energy. It will be a match similar to that of Germany," he said.

After the draw against Germany (1-1), Koke maintained that they "always" want to "win", more "after the game was put on their faces." "It's normal to have ambition, but it couldn't be. After watching the game and analyzing it, you leave with the feeling that we could beat one of the favourites. The team is very enthusiastic and energetic, wanting to continue doing things well. Let's continue doing what we are doing, that we are doing it very well", he said about the previous meeting.