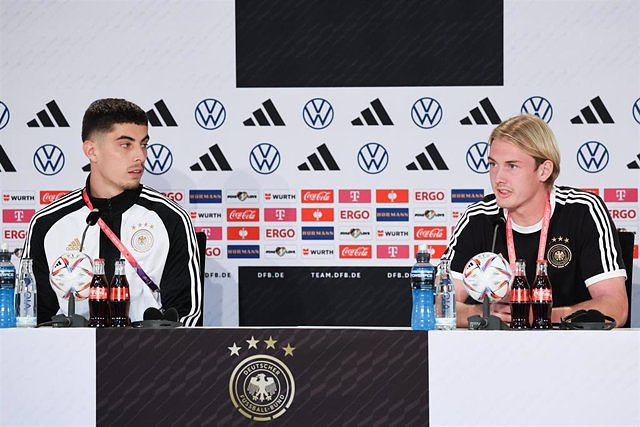 The midfielder of the German team Julian Brandt made it clear this Friday that it does not matter "too much" the 6-0 that the Spanish team achieved in the last confrontation that both teams experienced in 2020 and that "it does not matter to any player" of his team facing the duel this Sunday in the World Cup in Qatar, vital for Hansi Flick's men.

"I don't think it matters too much, it's been two years and we're in a different situation now. We've improved in many areas, even if things haven't gone well yet and, in the end, it's an opportunity to change the mood. 6-0 does not matter to any player," said Brandt, present that November night in Seville, at a press conference collected by the German Federation website.

The Borussia Dortmund footballer is clear that a match like this can help "release a lot of energy" and he recalled what happened in the last Euro Cup. "We also lost the first game (France) and still qualified," he stressed.

Regarding the defeat against Japan, the German believes that they did not know how to "take advantage" of the chances they enjoyed and that they may have had to go a little further back. "Japan played a lot of long balls, even before 1-2. We analyzed the goals and talked a lot about our behavior with the ball. If you're leading 1-0 and you see that you can't extend the advantage, you have to keep a clean sheet." he admitted.

"We talked about the whole game and everything we didn't do so well and where we definitely need to improve for Sunday. We had a good exchange of views and I think we all left with a good feeling. We have the will to win on Sunday." Brandt added.

For his part, striker Kai Havertz warned that they are not intimidated by Spain's 7-0 win against Costa Rica. "It's a strong result and of course we have to respect it because we know they are a high-quality team, but we're not going to hide because we know what we're capable of," he said.