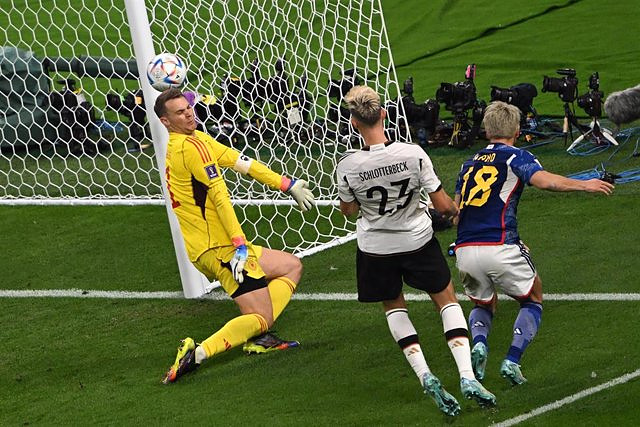 The Japanese team starred in the second big surprise of the World Cup in Qatar after beating Germany 1-2 this Wednesday in the opening of Group E, in which Spain is framed, after a game that changed radically in the second half after the overwhelming of a 'Mannschaft' that still hasn't woken up from the bad dream of 2018.

The four-time world champion was unable to defend her 2014 crown in Russia, knocked out in the group stage. There were many expectations after the regeneration started by Hansi Flick, but the 'Blue Samurai' surprised her after a great and daring second half that now opens everything in the group. The German team went ahead and had more chances, but showed some weakness in their area when it was demanded and ran out of points and when the duel got out of control.

But Japan started too respectfully, paying a 'cheap' price after a poor first 45 minutes. Frightened, perhaps, by the offensive front formed by Gnabry, Musiala, Havertz and Muller, she took refuge near her area and gave her rival almost complete control of the game.

The 'Blue Samurais' expected to try to steal and get away with the speed of Kubo and Ito, but Hansi Flick's men barely allowed it, except on a couple of occasions, one of them with Maeda's goal disallowed for offside. Germany soon carbureted and a header from Real Madrid player Rüdiger near the post opened their siege.

The 'Mannschaft' kept the ball and up top they did a lot of damage to the Japanese defence, especially on their right side where the full-back Raum hit time and again before the holes provided by his teammates.

Gonda and his rear then began to have a lot of work. The goalkeeper repelled a powerful shot from the edge of Kimmich and then Gundogan enjoyed two good chances, but in the first he chose a centered shot even though he had Raum only on the left and in the second, the clearest so far, his shot inside from the area ran into a defender as the ball was headed for the net.

The German insistence ended up having a prize after half an hour. His left side reappeared and Gonda knocked him down with some innocence so that the referee ordered the penalty that Gundogan converted. The advantage did not change the script and Germany continued with total control until the end of the first half and Musiala and Kimmich had two good options to make it 2-0, Havertz also annulled for offside. Maeda also gave Neuer a bit of a scare on the stroke of half-time.

But the setting changed radically in the second act. Hajime Moriyasu touched up his team with an apparent defensive change by putting a center back (Tomiyasu) for an attacker (Kubo) and passing three center backs. In addition, he made his players take a clear step forward and the game was balanced.

Japan was more aggressive and Germany began to feel uncomfortable for the first time, especially behind, where, except for Rüdiger, they left loopholes. However, he had more space and could have sealed the match with two options from Gnabry and a Musiala who showed all his ability inside the area, dodging rivals and then failing in the definition.

Moriyasu saw the improvement of his team, which went from being reserved to launching for the equalizer, and brought in an Asano who would be key because he became a headache for the four-time world champion's defense, demanded for the first time.

Even so, Germany was the one that was closest to the goal again. Gundogan smashed his sharp shot off the post and Gonda would keep his men alive with a triple save before the game took an unexpected turn. Neuer put a great hand to Ito and Sakai, with everything in his favor, sent the ball wide, a clear warning of what would happen shortly after, when another save by the Bayern goalkeeper was not forgiven this time by Doan.

Flick's men accused the blow and the coach resorted to a '9' like Füllkrug, but his rival not only did not give in but also did not forgive a tremendous oversight in defense. Asano was left alone, Schlotterbeck lacked forcefulness and Neuer did not cover his stick well before the powerful shot, close and heeled, from the Japanese striker that unleashed the madness and the battered German team. Against the clock, he locked up the 'Blue Samurai', but only Goretzka touched the tie.