Franco: "CELAD is more efficient and has a renewed desire to remove prohibited behaviors from sport" 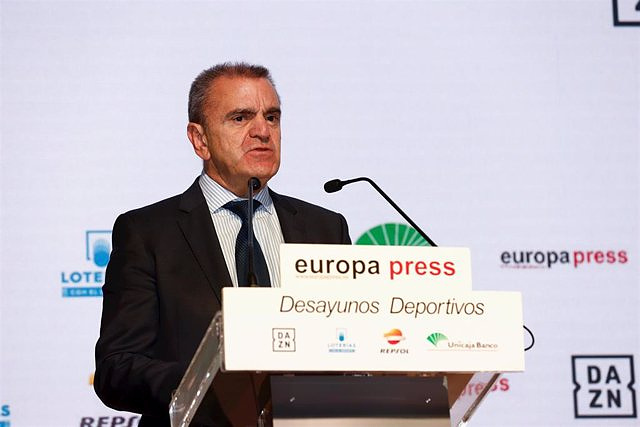 The president of the Higher Sports Council (CSD), José Manuel Franco, stressed that the Spanish Commission for the Fight against Doping in Sport (CELAD), "is more efficient" and that it has been created with "a renewed desire to remove prohibited behaviors of sport", and as one more step to place Spain "at the international vanguard" in the battle against this scourge.

The leader was in charge of introducing José Luis Terreros, director of CELAD and protagonist this Thursday of the 'Sports Breakfasts' of Europa Press, sponsored by Unicaja Banco, Repsol, DAZN and State Lotteries and Betting, of which he highlighted his leadership in the creation of the new legislation that "places Spain at the international forefront".

"And it is that, with the entry into force of the current Anti-Doping Law, approved unanimously in Las Cortes and the result of a marked and worked spirit of consensus, Spain reaffirms its firm commitment to a clean sport in full accordance with the regulations of the World Anti-Doping Agency", stressed Franco.

This valued the implementation of the Spanish Commission for the Fight against Doping in Sport, which comes to replace the old Spanish Agency for the Protection of Health in Sport (AEPSAD). "It is an organization with a more efficient functional structure and with a renewed desire to keep prohibited behaviors away from sport that undermine its true principles and values," he explained.

Regarding his José Luis Terreros, he recalled that he has been with the CSD since 2009 and that in 2017 he was appointed director of the AEPSAD, and that "thanks to his deep knowledge of the world of sports and sports medicine, he has performed the functions attributed to his post from rigor and independence".

"He has worked away from the spotlight, discreetly, but seeking the collaboration of all the sectors involved in this fight and always moved by a firm commitment such as protecting the health of athletes and defending their rights. in a competition on equal terms", added the president of the CSD.

In addition, he stressed that, "as president of the CSD and CELAD", he has always thought that Spanish athletes "deserve strong and rigorous institutions, supported by clear and effective regulatory tools that allow fair, healthy and equal competition".

"The triumphs of our athletes must always be the result of their effort, dedication and desire to excel, and not shortcuts that put their health at risk and debase their ethical principles. At a time when Spanish sport is facing the future with enthusiasm and with the largest investment in public resources ever made in our country, we have to affirm emphatically that the key to success lies in both the what and the how. We will only feel proud of our sport if it is exemplary", he concluded.