Felipe VI goes down to the locker room after the 7-0: "Keep doing the same"

The king was at the premiere in Qatar and congratulated Luis Enrique's men for a spectacular debut. 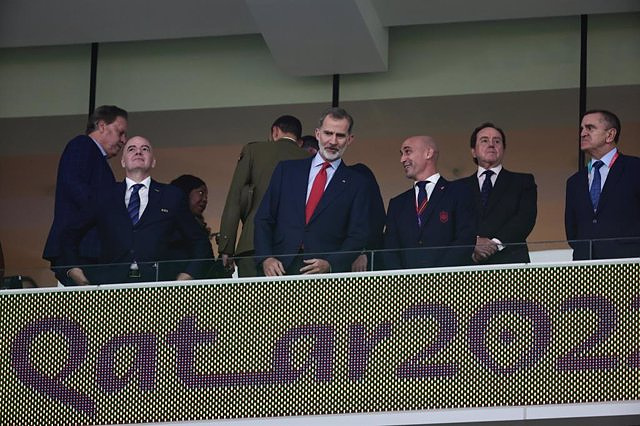 King Felipe VI congratulated the Spanish team this Wednesday for their spectacular debut (7-0) in the 2022 World Cup in Qatar, a win he had never witnessed in a football match, with which he had a simple message for Luis' men Enrique.

"Keep doing the same," said the monarch, smiling like the rest of those present in the Spanish dressing room at Al Thumama in Doha. Felipe VI unleashed laughter from everyone because he dropped that from now on they 'only' had to do the same as before the 'ticos'.

The monarch went down to the changing rooms after the game and greeted all the players and members of the technical team. "There is still a lot of Championship left. I had never gone to a match with a result like this. We have enjoyed it. In addition to the result, it is seeing you play, it has been a joy", he pointed out.

On the other hand, Felipe VI insisted on the great way to debut in a World Cup. "I am not an expert, but I have not seen any failure. It has been a joy, a show. Starting like this is a pleasure," he finished.

‹ ›
Keywords:
Rey Felipe
Your comment has been forwarded to the administrator for approval.×
Warning! Will constitute a criminal offense, illegal, threatening, offensive, insulting and swearing, derogatory, defamatory, vulgar, pornographic, indecent, personality rights, damaging or similar nature in the nature of all kinds of financial content, legal, criminal and administrative responsibility for the content of the sender member / members are belong.
Related News