England feast at the expense of Iran with a resounding win (6-2). 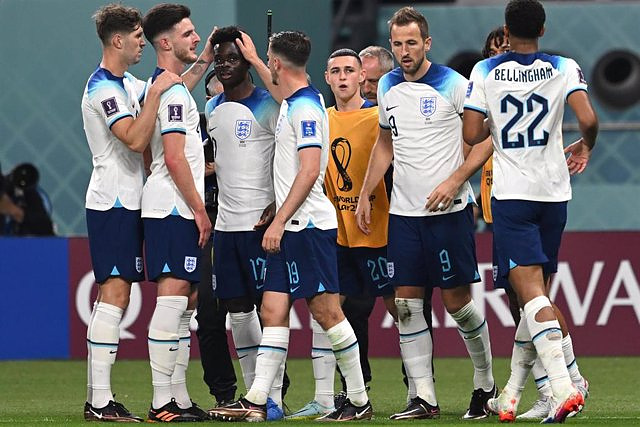 Southgate's men beat Queiroz's team forcefully and with lethal effectiveness, who only smiled with Taremi's double

The English team beat Iran (6-2) this Monday in the first match of Group B of the World Cup in Qatar, thanks to goals from Jude Bellingham, Bukayo Saka -double game-, Raheem Sterling, Marcus Rashford and Jack Grealish, to begin his World Cup adventure emphatically and with confidence and confirm his candidacy to lift the title, against a very poor and defensively weak Iranian team that only smiled with Mehdi Taremi's double that made up the score.

After their last victory in March this year, England smiled again at just the right time. The English had the necessary patience at the start of the match, with a tight and thick proposal from the Iranians. With Bellingham omnipresent, 'The Three Lions' sealed the victory before the break with three goals that sank Iran, which stretched in the second half, although too late, being 'victims' of the English feast.

The Khalifa International Stadium hosted a match that began dominating England with a lot of ball and mobility from their most advanced men. 'The Three Lions' asked Maguire for a 'hug' penalty on a set piece that prevented him from finishing off, but the carioca Raphael Claus did not see anything punishable just started the game.

The start was marked by the strong shock received by the Iranian goalkeeper Beiranvand by a teammate, after hitting a dangerous cross from Harry Kane's right. The blow to the head, including bleeding, meant that the goalkeeper had to be replaced by Hossein Hosseini halfway through the first half.

After two clear chances from Mount, with a shot into the side of the net, and Maguire, who finished off the crossbar, England managed to break Iran's tough scheme with a precise header from Jude Bellingham to finish off the cross with music from Shaw. The one from Borussia Dortmund presented himself in the best possible way in his first World Cup as one of the figures to take into account.

Not even ten minutes later, with the first part already fading, Iran would see how its real options vanished. First with Saka's 2-0 lead, who connected an aesthetic volley with the outside of his left foot, after a headed pass from Maguire, who imposed his aerial strength in a corner kick. And in the first minute of the addition of this first stake, Sterling extended the English feast with the 3-0. The one from Chelsea culminated a transition led by Bellingham, who served a Kane who was the perfect assistant for the winger in his role as a powerful '9'.

After the perfect storm in favor of the English, the dominance of 'The Three Lions' continued in the second half, although with somewhat less offensive insistence. With set pieces in danger, England had to wait until 62' to continue celebrating goals with the 4-0 draw and double from Saka in his World Cup debut.

However, Iran, adrift since the beginning of the English goalscoring feast, was able to smile with goal scorer Taremi's honor to make it 4-1, after picking up a loose ball in the area taking advantage of an English oversight. Southgate moved the bench to provide oxygen and legs to the English team, with Grealish, Foden, Dier -who replaced an injured Maguire- and Rashford, author of the 5-1 with his first ball with a delicate cross and low shot in a run by the right.

Queiroz brought on the Leverkusen striker Sardar Azmoun at the end, his main star, touched and only with about 300 minutes on his legs so far this year. The Iranians enjoyed some isolated occasion, but without success. and with six goals 'in the bag', after Grealish's last goal of the game at will, without a goalkeeper, after a pass from Wilson that took advantage of the spaces in the Iranian defense in minute 89'.

Tough punishment for Iran, who in their last career in the Mudia team only conceded two goals in the entire group stage, and who could make up the result somewhat with a penalty goal from Taremi, who completed his double after Claus went to see the VAR a grab from Stones in the area.

Before the match, the Iranian players did not sing the anthem, in a gesture interpreted as a sign of support for the protests that have shaken the Islamic Republic since the death of the young Mahsa Amini.