Djokovic-Paul and Sabalenka-Linette, second singles semifinals of the Australian Open 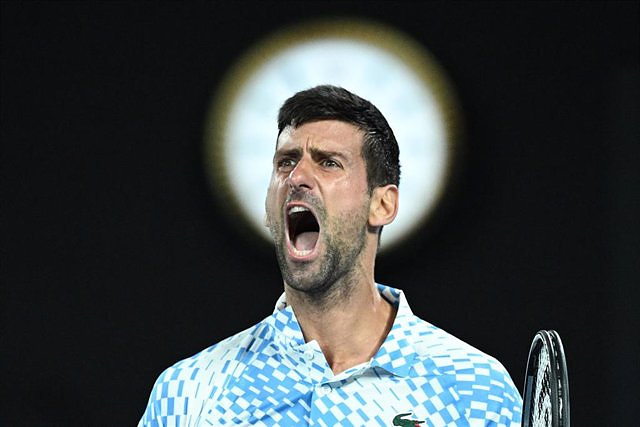 The Serbian tennis player Novak Djokovic and the American Tommy Paul, in the men's draw, and the Belarusian Aryna Sabalenka and the Polish Magda Linette, in the women's, completed the semifinals of the Australian Open on Wednesday, the first 'Grand Slam' of the season.

The nine-time champion seems to have raised his level of tennis with the arrival of the decisive rounds and after devastating the Australian Alex de Minaur, to whom he only lost five games, he did the same against the Russian Andrey Rublev, fifth seed and who lost 6-1, 6-2, 6-4 in just over two hours.

The man from Belgrade, fourth favourite, was overwhelming against the Muscovite, who he did not give any option on the Rod Laver Arena court and who continually tormented the rest, enjoying up to 14 break opportunities. Instead, the Serb never lost his serve, with five break points, none in the third set, which he saved in a match where he signed 32 winners to just 21 unforced errors.

In his 44th semifinal in a "major" and on his way to playing his tenth final at Melbourne Park, "Nole" will have as his opponent the only American who remains with options in the draw, Tommy Paul, who took the duel against his compatriot and revelation of the tournament, Ben Shelton, in four sets by 7-6(6), 6-3, 5-7 and 6-4.

The 20-year-old world number 89 tried to extend his adventure in a match where he signed 24 'aces' and where after losing the first two sets, he found himself with a 'break' down in the third. However, he managed to balance it with his first break and later force a fourth where Paul, devastating with his 'drive' throughout the match and more regular in his tennis, did not miss a quick break to get into the first semifinals of a 'Grand Slam' .

On the other hand, in the women's draw, the big surprise continues to be given by the Polish Magda Linette, number 45 in the world and who has stood two games away from her first 'Grand Slam' title after never having passed in her career of the third round.

Linette has unexpectedly taken on the role that seemed reserved for her compatriot and world number one Iga Swiatek, eliminated in the round of 16, and maintains her dream in Melbourne after beating the Czech Karolina Pliskova 6-3 with considerable solvency. 7-5.

The Pole knew how to control her nerves against a rival, who has moved away from the best, but more expert in these battles and who was looking for her second semifinal in this 'big'. However, the former world number one did not have her match, with 36 unforced errors, including seven double faults. Still, she held on to her options in the second set, but Linette didn't waste her seventh breaking point in the eleventh game and sealed her ticket to the penultimate round.

She will face the highest seeded woman left alive in the women's draw, the Belarusian Aryna Sabalenka, fifth, who reached for the first time, and fourth in her career, the semifinals at the Australian Open by beating the Croatian Donna Vekic with authority by 6-3, 6-2.

Sabalenka now hopes to be able to break her curse in the next round and play her first 'Grand Slam' final after falling just short of the final at the US Open in 2021 and 2022 and at Wimbledon in 2021. In a match In which both accumulated 22 double faults, 9 for the Belarusian and 13 for her rival, the Minsk player took advantage of her 35 winners and her ability to save 12 of the 14 break balls she had against.