De la Fuente: "To be in the Under-21s, players must perform at the level of excellence" 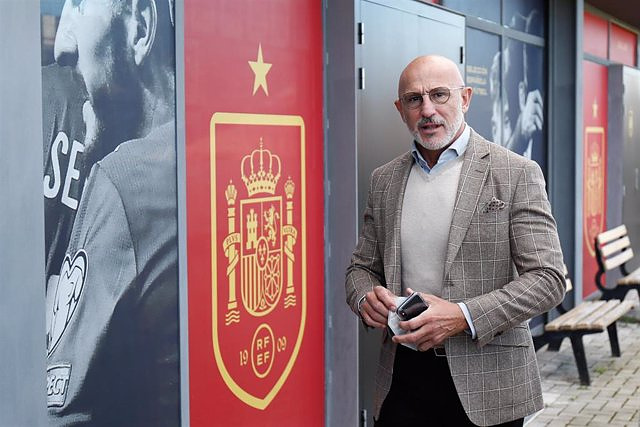 The U-21 national coach, Luis de la Fuente, made it clear this Monday that he intends to continue "providing continuity to the work that is being done" with a view to taking the best team to the European Championship in the category next year and that the players must understand that to be in the national team "they must perform at the level of excellence".

"We want to continue giving continuity to the work that is being done and that it is being very good. The players are giving a high level and growing a lot, and we have to continue progressing, improving and also seeing some players who have been breaking through with force in these last days and they have earned the opportunity," De la Fuente told the media.

The Riojan is pleased that they currently have "an even broader relationship to gradually close that circle by June", the month in which they will play the European Championship, and which will be joined in this call by players such as Pablo Torre or Gabi Veiga, that "they are earning it" like the rest and have "presence" in the first team.

The one from Haro believes that all the young people who appear give them "many guarantees and facilities", but that it was not "a matter of radically changing the entire team". "We want to have a powerful and powerful team, not only to test, we want to consolidate an idea and a team. We have to have a balance and the new ones give us another energy", he underlined.

Regarding the Celta footballer, the coach stressed that "within that versatility and wealth" that he possesses, he sees him playing "in the interior zone with arrival because he has a very good shot and also a good shot." "In some circumstances he could also play on the wing," he added.

De la Fuente also clarified that he considers Beñat Turrientes "interior and also as that '6' more positional and easy to distribute", while the absence of Juan Miranda, "a well-known and identified player" with this U-21, it is due "simply to the fact that Alex (Balde) and Manu (Sánchez) are earning it".

In addition, it so happens that there are no LaLiga SmartBank players in this call in order to "not 'harm' any team". "The friendly against Japan is important, but we could cover it with other possibilities and we didn't want to cause any inconvenience to any Second team that is playing a lot. Several could have been", he admitted.

"I am clearly convinced that there is a bet on young people and I am going to take advantage of any public appearance I have to demand those opportunities because they are of tremendous quality, solvent and identify with their clubs. They deserve the opportunity to show the potential they have inside and I am pleased that many youngsters and top-level players are appearing because for us it opens up a much wider range where the vast majority are level enough to be all in a U-21 where there is a tremendous demand", he asserted about the protagonism of the youngsters in this first season stretch.

The friendly with which they will close the season will be against Japan, a rival they know "very well" and of which he highlights that "footballing has improved a lot and has a very recognizable methodology". "They have won in all aspects and we are obliged to demand the best of ourselves as against any rival, but more so in this case because they will demand the best version of us and I celebrate it because I want the players to understand that to be here you have to perform at the level of the excellence," he remarked.

On the other hand, De la Fuente, "optimistic by nature", hopes that the Absolute will play "a great role" in the World Cup in Qatar, "although winning is very difficult". "It is a selection of guarantees, with a great list of players and with a team and a coaching staff that are very hungry and eager to do something great. We are candidates without any doubt," he said.

Finally, asked if the current U-21, mixed with players who are still at that age and who have already made the leap with Luis Enrique Martínez such as Pedri, Gavi or Ansu Fati, would perform in the World Cup, the Riojan was clear .

"It would be competitive, but in a World Cup the big teams are very powerful and have a lot of experience to know how to withstand certain moments of tension. These players have a long way to go and it would be a very nice dream to think that they can be very high, but to be able to fight At most, no," he said.