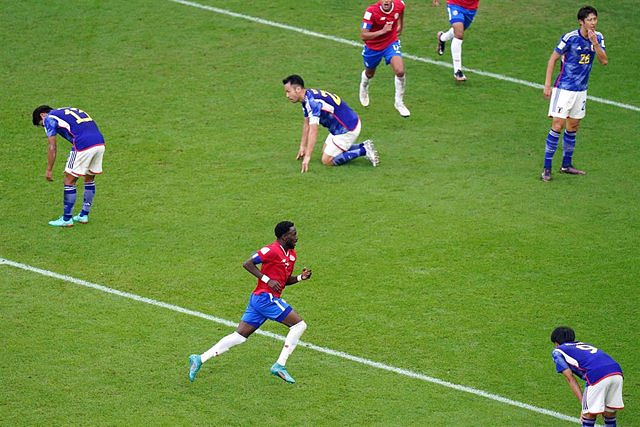 The Costa Rican team has given a blow to the table and has beaten Japan this Sunday (0-1) in the second day of Group E of the World Cup in Qatar, a victory that restores their confidence after the defeat suffered in their debut against Spain and that prevents the Asians from certifying their pass to the round of 16.

A solitary goal from Keysher Fuller in the 81st minute was enough for the Central American team, beaten by a painful 7-0 in its debut, to surprise the 'executioner' of Germany, who if he won this Sunday and linked it to a victory for Luis' men Enrique would be mathematically in the playoffs. However, Luis Fernando Suárez's men pulled their punches and a good game from Keylor Navas to take their first three points.

Despite the fantastic opportunity for the Japanese and the urgency of the 'ticos', the first half at the Áhmad bin Ali Stadium did not leave a single shot on goal, with both teams probing but not risking too much for fear of making a mistake.

Ayase Ueda and Daichi Kamada were the most active of Hajime Moriyasu's men, who opted to introduce two changes at halftime. With the entry of Takuma Asano, author of the winning goal against the Germans (1-2), the team began to fuel.

In fact, he himself forced Keylor Navas's stretch with a powerful shot just after the match resumed, a save that marked the first for the Paris Saint-Germain goalkeeper in this World Cup.

Japan stretched and was about to take the lead in the 55th minute with a right hand from Yuki Soma that brushed the post; the Japanese winger tried again a few minutes later, but his free-kick went over Navas's goal.

After another direct free kick that the Asians hit the wall, Costa Rica called for a penalty in an action in the area in which Kendall Watson fell in the area and the referee did not whistle, but it was Keysher Fuller who managed to open the can; in the 81st minute, the full-back unleashed a powerful shot from the edge that surprised Shuichi Gonda, who could only brush the ball with his fingertips as he slipped through the top corner.

The 'blue samurai' could have neutralized the 'tico' goal in the 87th minute, but Keylor Navas emerged to thwart Asano's shot after a great play by Mitoma. In this way, the Central Americans forget the win against 'la Roja' and continue dreaming of the round of 16.