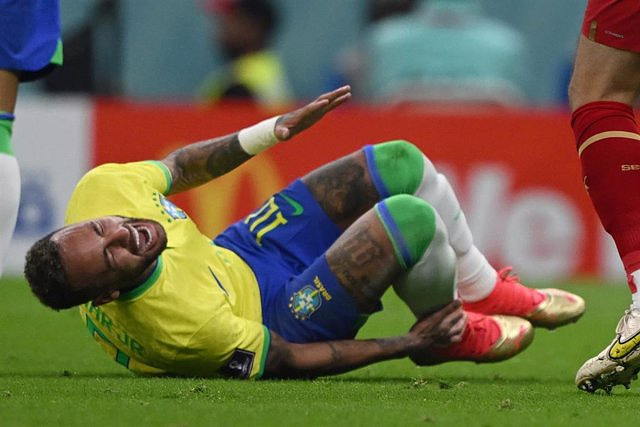 The Brazilian team will not be able to count on striker Neymar Jr for their next match in the World Cup in Qatar this coming Monday against Switzerland due to the ankle injury he suffered against Serbia in his debut this Thursday.

The '10' couldn't finish the match against Serbia after suffering a hard attack, which left him visibly damaged in the ankle. Despite the apparent reassuring words of the Brazilian team, Adenor Leonardo Bacchi, 'Tite', after the match assuring that their leader could continue playing, the medical tests he underwent this Friday rule him out, for now, for the next game .

"The tests showed an injury to the lateral ligament of Neymar's right ankle along with a small inflammation in the bone," said the medical report offered by the "canarinha's" doctor, Rodrigo Lasmar.

The galenó also confirmed that both the French Paris Saint-Germain forward and the winger Danilo, who has "an injury to the medial ligament in his left ankle" will not be against Switzerland. "We can already say that we will not have both players for our next match, but they are still undergoing treatment with our goal of trying to get them back in time for this competition," he said.

"It is very important that we are very calm and at peace. We will carry out this evaluation daily so that we have information and make the best decisions based on that," added Lasmar, who stressed that the two footballers began their treatment "immediately" after the match against Serbia.