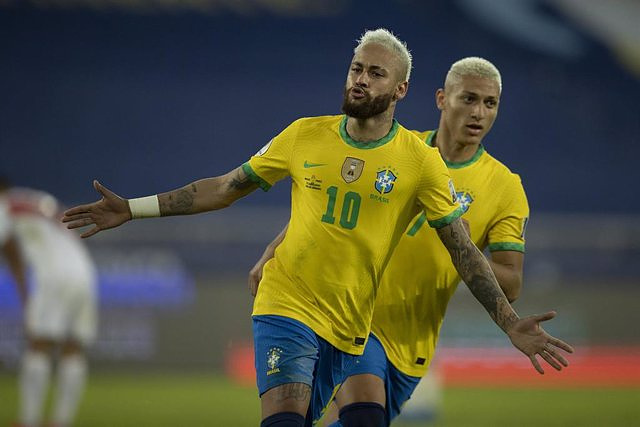 The 'Canarinha' begins its journey in Qatar as the top favorite with an intimidating squad, while Serbia takes refuge in its physical power

The Brazilian team faces this Thursday (8:00 p.m.) its debut in the World Cup in Qatar against the strong and energetic Serbian team, a duel in which the 'Canarinha' will want to start their World Cup adventure with authority and without scares to confirm their maximum favoritism and threatening potential as a candidate series.

The team trained by Tite, the only coach together with Tele Santana -1982 and 1986- who led Brazil in two consecutive World Cups-, traveled to Qatar leading a group of favorite teams to lift the coveted trophy, something they have not achieved for 20 years, when they won the World Cup in Korea and Japan. A logical favorite poster given the high-level squad with which they will seek their sixth title.

The variants of the list of 26 footballers of the 'Verdeamarela' are almost infinite, with an enviable offensive phase that intimidates. Tite could 'afford' to leave out names like Roberto Firmino, Philippe Coutinho and Matheus Cunha, in a team led by Neymar, who arrives encouraged with four goals in five games. This will be the director of an orchestra made up of Vinicius, Rodrygo, Antony, Gabriel Jesús, Gabriel Martinelli and Richarlison.

The PSG striker will be the starter, behind Gabriel Jesús or Richarlison, while Vinicius' position on the left would be in doubt, given Tite's option to incorporate another midfielder along with Casemiro and Paqueta. Not a far-fetched option, given Serbia's physical strength in midfield.

However, the offensive capacity of the squad could be a temptation to line up up to four attackers, with Real Madrid player Vinicius on the left, Neymar as playmaker, Barça player Raphinha on the right and a '9'. This system would reduce defensive potential, but would benefit fluidity and verticality in the offensive phase.

The 'Seleçao', with only one defeat in the last three years, will seek to extend their streak of their last 15 matches in the World Cup group stages, with 12 wins and three draws. And it is that they have not lost in this first phase since 1998 against Norway. Furthermore, they have always ranked first since 1982, while the last time they did not advance to the playoffs was in 1966.

This Thursday will be the third confrontation between the two teams, after they were already included in the same group in Russia 2018, when Brazil won 0-2. The Serbs failed to advance from that group stage in what was their second participation in a World Cup since they were an independent team. The Brazilians, with a much less brilliant team, closed their adventure four years ago in the quarterfinals, when they fell to Belgium (1-2).

Serbia arrives undefeated in Qatar, after adding six wins and two draws in the qualifying phase for the tournament, condemning Portugal to the playoffs. However, since the disintegration of Yugoslavia, the name under which they achieved their greatest feats -two European runner-ups (1960 and 1968) and two World Cup semifinals (1930 and 1962), the 'White Eagles' have never managed to overcome the first phase.

Now he will entrust a large part of his options to Juventus striker Dusan Vlahovic, who finished the first third of the season in good shape and has scored 9 goals in 17 games. In addition, Brazil will have to keep an eye on the incombustible Aleksandar Mitrovic, author of 8 goals in the 8 qualifying matches, as well as being the Serbian player with the most goals (50) in the history of his team.

The team coached by Dragan Stojkovic will have Dusan Tadic, from Ajax, and Filip Kostic, winner of the Europa League last year with Eintracht and now a Juventus player, two leaders in terms of quality and power. In a team that also has Nemanja Guldelj or goalkeeper Marko Dmitrovic, both at Sevilla.