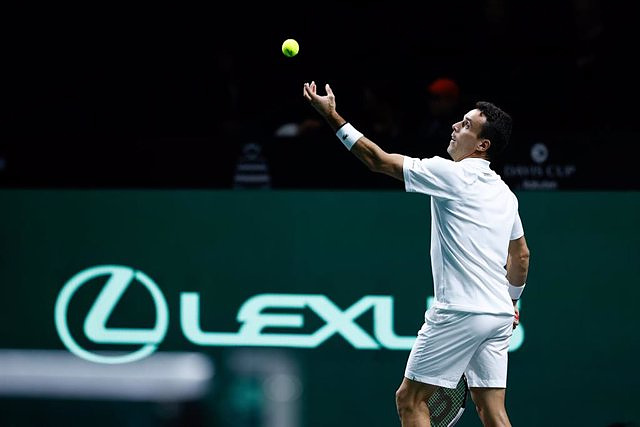 The Spanish tennis player Roberto Bautista lost (6-4, 7-6(4)) this Wednesday against the Croatian Borna Coric at the start of the Davis Cup quarterfinal tie in the Final 8 in Malaga, a bad start that forces Pablo Carreño to beat Marin Cilic next to keep Spain in the tournament.

Sergi Bruguera's team did not have it all with them, because of the rival, because of a fast surface that does not favor them and because of the absence in their ranks of Rafa Nadal and Carlos Alcaraz. Thus, it was time to get the best version in search of the seventh 'Salad Bowl', but Bautista ran into an almost perfect Coric and with clear ideas.

Martín Carpena did not intimidate the young Croatian, who with an accurate serve, aggressive with his forehand despite unforced errors, took one march more than his rival. Bautista could barely add points to the rest, with a 'break' option in the first set and Coric took advantage of those in the seventh game to take the lead.

The man from Castellón had the option of extending the sleeve with that breaking ball, but the Croatian scored the game and the set 6-4). Bautista improved with his serve in the second act and the stands got a little more into the game, but Coric, who is living a season back on the slopes after a long injury, was very solid.

The Cincinnati champion endured the Spaniard's improvement until a sudden death in which Bautista made the mistakes. Now, Carreño is forced to beat Cilic, a veteran who is reminiscent of his best times for the moment he is going through, to force the doubles point and avoid the elimination of the hostess.