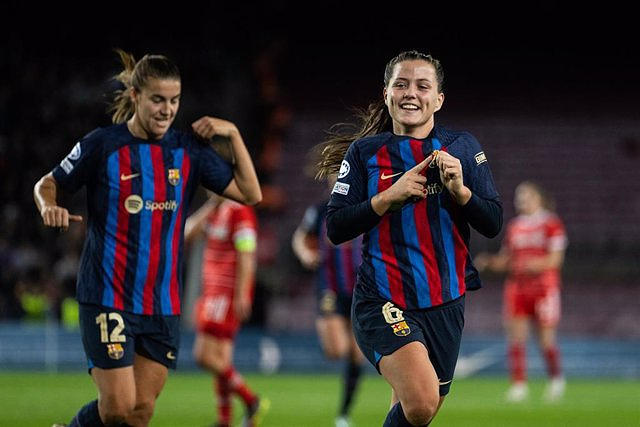 FC Barcelona consolidated its sole lead in Group D of the women's Champions League after beating German Bayern Munich 3-0 with a lot of work, in the third round of the group stage, after a match that started even but that ended up deciding Barca's effectiveness in the second part.

At the Camp Nou, dressed for the occasion, the champion of the 2020/2021 edition surely had his most demanding match of this season because he ran into resistance from a Bavarian team that rushed his chances of remaining undefeated. However, the success of the culé and the defensive solidity dissipated any attempt to bring the German closer to the goal of Sandra Paños.

Jonatan Giráldez's team had their best day offensively and, although they encountered the good work of the German goalkeeper Maria Grohs on several occasions, they barely suffered. Goals from Geyse, Aitana Bonmati and Claudia Pina gave him a good advantage that he knew how to maintain until the end, to subdue one of the greats in Europe.

After the initial score typical of a match of this magnitude, both teams did not take long to show their offensive weapons. The local team, somewhat more dominant in the game, had the best of the first half, although they ran into the defense of the Teutonic team. The central Viggósdóttir was a wall for the azulgranas, stopping at all times the attacks of Crnogorcevic and Geyse.

The Bayern goalkeeper also had her dose of prominence with a save after a shot by Aitana and, in addition, prevented Mapi's Olympic goal before going to the changing rooms. However, she changed the face of the locals after the restart, when, finally, they found the prize for her insistence in the form of a goal in minute 48.

Rolfö put a measured cross from the left to the far post, which Crnogorcevic headed in for Geyse to finish on a plate. The Brazilian crashed her header into the post, but the ball ended up going in. A breath of fresh air for the locals who from then on left the best minutes on the Camp Nou pitch.

Aitana Bonmati, at minute 59, sealed the match by making it 2-0 on the scoreboard after picking up a ball from the penalty spot that she hit the short post. Meanwhile, Claudia Pina, in 65, signed a work of art with the third of the night. The Catalan took a remote-controlled missile to the squad farthest from Rosh, after leaving a quality detail with oriented control.

On their return to the Camp Nou, Barça Femení set a new attendance record, with 46,967 spectators, the best attendance ever recorded for a group stage match.