Australia looking to finish off feat in Danish abyss. 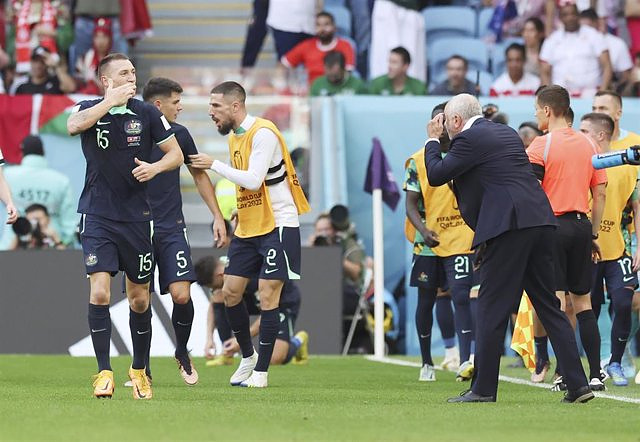 The 'Socceroos', reinforced by their last victory, could be worth a draw against some depressive Danes who will speed up their options

The Australian team will close their group stage in the World Cup in Qatar against Denmark, a duel that the Oceanians face with the intention of confirming their feat, after achieving their first victory in a World Cup since 2010, against a Danish team that continues to having options, although his performance has not been as expected, forced to risk the round of 16 on the brink of the abyss.

Australia arrived as the team, perhaps, less accustomed to the competitiveness of this type of tournament. However, this 'humility' and with nothing to lose, the Oceanic team has managed to get the most out of their pragmatic and effective style. He already tried it on the opening day, when he put the champions France against the ropes, although only at the beginning, with an early goal, but it was only a mirage when they fell 4-1.

However, their hard work for a rocky and tough team paid off on the second date, when they overcame Mitchell Duke's solitary header. This allowed the Australians to celebrate a World Cup victory again -the last one was in 2010-, in addition to having left a clean sheet for the first time since the 1974 edition held in Germany.

Duke's important goal gives Australia a good chance of advancing to the round of 16 and equaling their best result in a World Cup. It was in 2006, in his second participation in the tournament, when he reached that first crossing, when he fell against Italy that would be proclaimed champion. Graham Arnold's men would repeat the dream of the round of 16 16 years later if they beat Denmark, although a draw is also worth it, as long as Tunisia doesn't beat France.

It is more difficult for the Danes, now with only one point in this Group D, who will have to beat Australia and hope that Tunisia does not beat France. If the African team were to beat the defending champions, second place in the group would be defined by the goal difference between Denmark and the Tunisians (both -1).

The European team was not able to break the Tunisian wall on the first day (0-0), letting two points escape which they surely had before the start of the tournament. Nor could he extend his great balance against France on the second day, when a double from the threatening Kylian Mbappé dried up the Nordic system. And it is that the model that gave joy in the last Euro Cup, where it was the revelation team, and in the League of Nations has not yet been confirmed in Qatar.

But they are still in time to take off and not confirm one of the disappointments of the tournament, recovering the 'covered' poster for the playoffs. Being in control and not falling into the typical nervousness of these tournaments when you are on the brink of the abyss will be key to confirming your highest level. In addition, the individual talent of men like Eriksen, Holjberg or Daamsgard must prevail over the Australian shortcomings, with a team without a clear reference.

Kasper Hjulmand will have to decide whether to give Andreas Christensen continuity in the 'eleven', warned, like Rasmus Kristensesn on the right lane. The FC Barcelona central defender was the author of the only goal for the Danes in this World Cup -against France-, confirming his fundamental role in this team, with a good performance also against Tunisia. The best Daamsgard is also expected in attack, where he is missing the position of '9', without a clear striker, with Cornelius, Dolberg and Braithwaite fighting for that position.