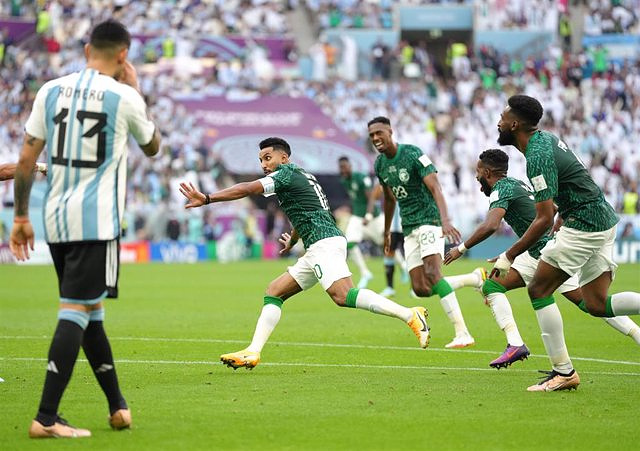 Scaloni's men lose (1-2) to the 'Cinderella' of the group, after going ahead with a penalty from Leo Messi

The Argentine team fell (1-2) surprisingly against 'Cinderella' Saudi Arabia this Tuesday in a debut to forget at the World Cup in Qatar, after the Asian team, with more character and effort, came back from behind the first goal of Leo Messi, from a penalty, with goals from Alshehri and Aldawsari, to complete his World Cup miracle.

As it already happened in 2018, the 'Albiceleste' could not celebrate a victory in their debut in Qatar, after forgiving in a first part in which they were much better, with two goals canceled against Lautaro Martínez. Messi opened the way for a penalty, but after not convicting before the break he suffered in the flesh from electricity and the commitment of a Hervé Renard team that he believed in the comeback.

As planned, Argentina was the owner of the ball, in a system with Paredes as anchor and with total freedom for Papu Gómez and De Paul in the creation, almost at the height of the forwards. Messi was at ease throughout the first part, being a 'toothache' for the Saudi defense.

And after a first and early notice, the '10' started his fifth World Cup with a goal. The PSG star converted a penalty after the referee Vincic reviewed in the VAR a 'hug' to Paredes from the Saudi player Abdunhamid. Messi threw it with a lot of mettle and directed an "appetizing" victory for Argentina.

That first goal made the wall of Saudi Arabia a little weaker, and halfway through the first half Messi scored again, but the goal was disallowed for offside. This would be repeated two more times.

First with a great goal from Lautaro Martínez after a fantasy pass filtered by 'Papu' that the forward stung with finesse and elegance, but in an advanced position. And later, with the Inter Milan man again as the protagonist, when the attacker, again in an illegal position, sent a good delivery from '10' into the net.

The 'Albiceleste' tried again and again with the aim of leaving the most 'affordable' game in the group sentenced before the break, but Saudi Arabia was 'saved' from a win in the first half. Perhaps for this reason, Hervé Renard's men came out plugged into the second stake, and after 'conceding' many blows, although without 'KO', he gave an hook in the form of a goal by Alshehri to the Argentines that left them groggy.

With Argentina uncomfortable and thicker for the 1-1, the Saudis, much fresher than the Latin Americans, took advantage of the inertia and from the boots of their most talented player came the 1-2. Aldawsari caracoleó within the area, with a couple of good cuts, and from the left side he shot with power and placement to the right corner of the 'Dibu' Martínez goal, which he could not hit fully.

Scaloni wanted to wake up his team with three changes at once, bringing on Lisandro, Enzo and Julián Álvarez, but he did not achieve the desired effect. Tagliafico had the clearest after the game hour, with a header from point-blank range in the small area that the Saudi goalkeeper Alowais pulled off with reflexes. Di María and the City forward staged other approaches, although less dangerous than in the first half.

Saudi Arabia completed the final stretch sheltered in their field, celebrating each steal and chance saved as if it were a triumph. Julián Álvarez had a header but Alowais continued immeasurable. He could not rescue a point Argentina, very touched and that now is forced to throw epic to have a place in the round of 16. The Asians are now candidates to advance to the crosses, something they only achieved in 1994, thanks to their first victory against a South American team.