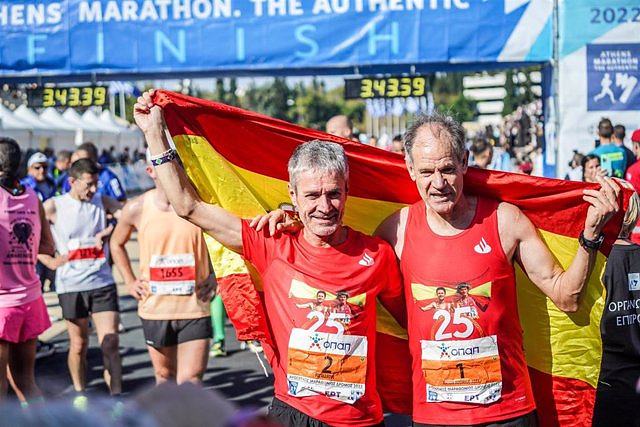 The Spanish athletes Abel Antón and Martín Fiz have reissued this Sunday at the Athens Marathon the pulse they maintained in the 1997 World Athletics Championships, in which they won gold and silver respectively, in an initiative by Banco Santander for the 25 years of the feat.

The two Sports Santander ambassadors crossed the arch of the legendary Panathinaikó stadium again and joined in an intense hug upon arrival at the finish line. Fiz, injured, could not complete the test this time, but he joined the last meters through the center of the city to accompany his rival and friend until the arrival.

"I have been waiting for him as if he were my son. Expectant, nervous and restless," Fiz acknowledged. Antón, who did complete the marathon with number 1, was able to merge in the dream hug with his inseparable Martín Fiz, number 2, completing the 42 kilometers and 195 meters. The two crossed the finish line in a time of 3 hours and 39 minutes with the sole objective of celebrating a sporting rivalry that has given glory to Spanish sport.

"When you enter you feel that great triumph that the Spanish marathon had here in Athens and you think about how we were able to win it because it is a very tough race," Antón declared upon arrival. "I was moved. This race will always be special and it has given me something very important, which is to be able to enter this stadium again," said Fiz.

Up to a hundred athletes traveled with the Sports Santander ambassadors to Athens to experience and celebrate the event first-hand. "One of the most beautiful things about this, and that motivated us the most, was sharing this moment with people who have accompanied us for years," they confessed.

‹ ›
Keywords:
Banco Santander
Your comment has been forwarded to the administrator for approval.×
Warning! Will constitute a criminal offense, illegal, threatening, offensive, insulting and swearing, derogatory, defamatory, vulgar, pornographic, indecent, personality rights, damaging or similar nature in the nature of all kinds of financial content, legal, criminal and administrative responsibility for the content of the sender member / members are belong.
Related News